Skip to content
You are here
Home > World News > Australia Day 2012: Fireworks and lightning combine to light up Perth’s skies


Flashes of brilliance: Fireworks and lightning combine to light up Perth’s skies in spectacular style on Australia Day

Crowds who braved extreme weather conditions in Perth, Australia were treated to a doubly dazzling display in the skies above the city.

An estimated 250,000 people turned out to watch the 28th annual Australia Day fireworks display in the western Australian city, despite fears weather conditions could disrupt the event.

The sky was lit up not only by fireworks but with spectacular flashes of lightning which occured in tandem with the organised displays.

Scroll down for video.. 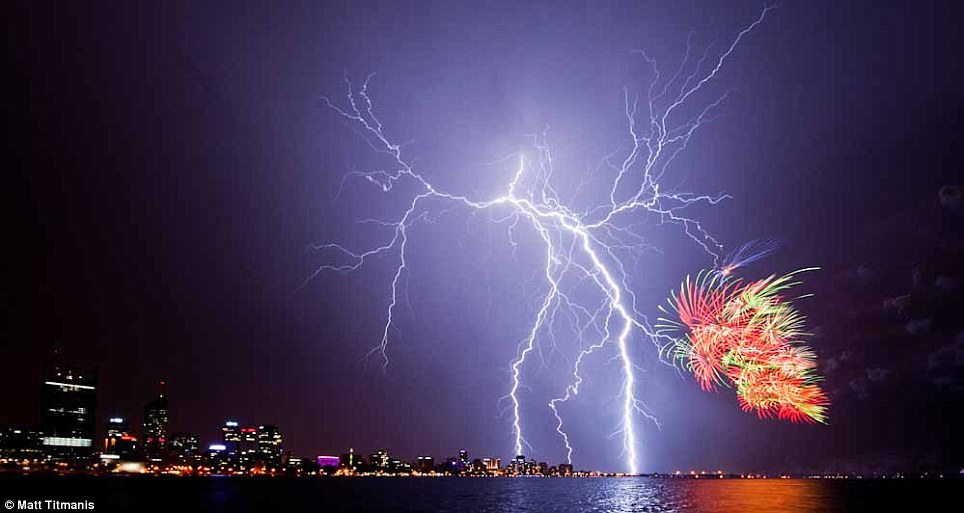 What a view: Crowds at the Esplanade in Perth, Australia were treated to an amazing display during Australia Day celebrations

Skylights: Nature and manmade explosives combine to create a spectacular sight over the city

High temperatures during the day and the threat of a huge thunderstorm in the evening had threatened to keep spectators away.

But, though numbers were down on last year’s event, crowds flocked to the Esplanade, the South Perth foreshore and Kings Park to see this year’s fireworks.

For those who did brave the conditions, the reward was spectacular.

One reveller said the display was ‘absolutely fantastic, worth getting wet for’.

The hunter becomes the hunted: ‘Dead’ bear shot with a rifle springs up and attacks its would-be killer