PHUKET: Two men’s attempt to flee police after a 20-kilometre chase starting in Chalong came to a crunching halt yesterday (May 18) when they hit a car head-on in a small street in Rassada.

The men were caught after they hit a car head-on in Soi Paniang, in Moo 5, Rassada. Photo: Eakkapop Thongtub

Capt Wichit Nokkaew of the Phuket City Police was called to the scene of the accident, on Soi Paniang, in Moo 5, Rassada, at about 5pm.

Standing by was the officer who had pursued the two men, with the two suspects in custody: Kitiphop Jongpet, 23, and Anisorn Tuthep, 23, both originally from Phatthalung.

Stopped in the middle of the small street was a grey Phuket-registered Honda City car with a sizable dent in its front. Lying on the road in front of it was a red motorbike registered in Surat Thani.

Kitiphop and Anisorn had escaped the collision without suffering any injuries.

The officer who had chased the men, who asked not to be named, explained that the pursuit began in Chalong.

He believed the two men were acting suspiciously and approached them to question them, but the men sped off.

The pursuit lasted some 20 kilometres, he said.

The men ignored the traffic signals and ran red lights at every intersection and went through two underpasses, he added.

“They were eventually caught because they hit the car on this small street,” he said.

After apprehending the duo, officers searched the motorbike and found three bags of kratom leaves under the seat. 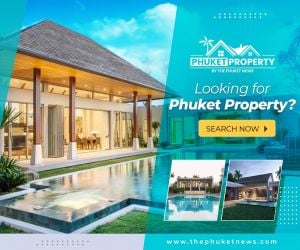 Capt Wichit confirmed that Kitiphop was taken to Phuket City Police Station and charged with reckless driving causing damage to other people’s property.

Both Kitiphop and Anisorn were to be taken to Chalong Police Station to be charged with possession of a Category 5 drug, Capt Wichit added.

Possession of fresh kratom remains illegal despite a bill being passed by the House of Representatives and later by the Senate in February this year to make possession of the raw plant legal.

Unde the bill, processed forms of the plant are to remain illegal.

Kratom when ingested acts as a mild stimulant. However, it is a key ingredient in the notorious drug cocktail 4×100 (“Four times one hundred”).

At last report, Justice Minister Somsak Thepsutin in February explained that the Senate speaker was to forward the bill to the House speaker, who would submit it to the Cabinet.

The Cabinet was then to send the legislation to His Majesty the King for final approval.

The bill was to become law 90 days after it had been published in the Royal Gazette.

So far, that has not happened.

No lockdown, no curfew, no alcohol at restaurants || April 16