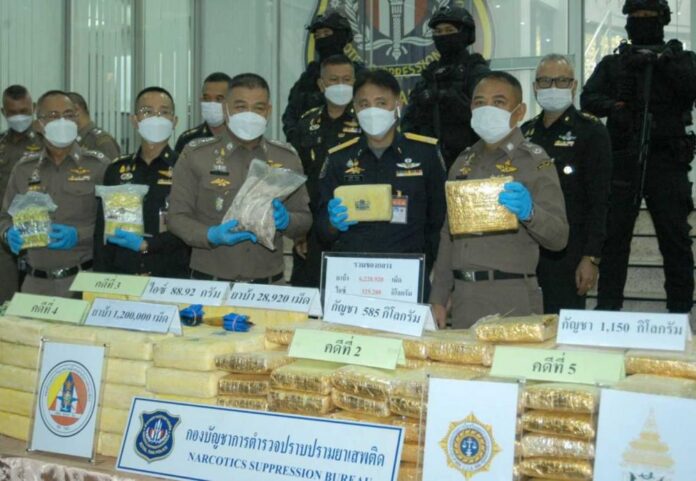 The first case took place in Pathum Thani where about 323 kilograms of ice methamphetamine was reportedly being delivered to a client. The suspect was arrested at a department store following the investigation.

Moreover, 6,228,920 meth tablets and 5.44 kilograms of heroin contained in three vehicles were discovered in the central area of Nakhon Sawan while the alleged drug suspect was traveling from Chiang Rai to deliver them to his network in the Southern Phatthalung province.

Another case also included the confiscation of 5 million meth tablets reportedly delivered from the upper province of Phayao to a drug network in the inner areas of the Central region. The alleged drug delivery man was captured in the area between Phetchabun and Chaiyaphum provinces. Additionally, officials from the Narcotics Suppression Bureau revealed the progress of drug smuggling to Taiwan which led to the arrest of nine alleged gang members on October 29th, allowing the police to capture another lot of 466 kilograms of heroin hidden in two containers from Thailand to Taiwan this afternoon.

The police said that they would inspect the warehouse where the drugs were being packed before being delivered overseas this afternoon.

Need Covid-19 insurance for your next trip to Thailand? Click here.