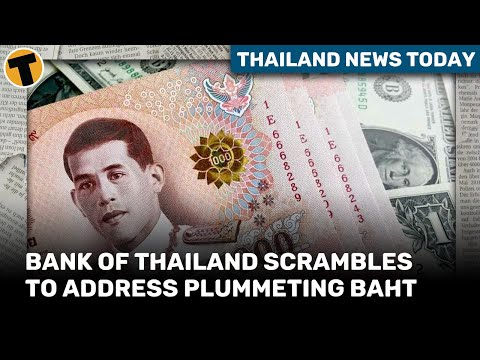 The Bank of Thailand is scrambling to find sources behind the weakening baht as a meeting is called to discuss its impact. As of this recording, the baht trades at 37.4 against the US dollar.

Finance Minister Arkhom Termpittayapaisith says the depreciating currency is adding to the inflationary pressures and vowing to determine whether the decline is linked to the country’s economic fundamentals.

The Finance Ministry is set to hold talks with the Bank of Thailand to determine the cause of the baht’s decline. One contributing factor could be external forces, such as the strengthening of the US dollar.

Arkhom says the Finance Ministry can only do so much as the Bank of Thailand controls the monetary policy.

“….So the planned talk will be a joint analysis to see whether the baht is depreciating too fast and how its decline in value is affecting the economy, businesses and consumers.”

Arkhom says the Thai baht will adjust accordingly with the US Federal Reserve after it finishes increasing interest rates. But, he says the gap between the US and Thailand’s interest rates has not significantly affected capital outflows.

Thailand’s Deputy Premier, Prawit Wongsuwon, reportedly advised the cabinet that something needed to be done to manage the baht, with Arkhom agreeing to investigate the matter. Prawit did not have an answer as to whether he was seeking to regain a rate of 35 baht to the US dollar.

He said, “I used the word ‘should’, but authorities concerned will look into it and see what they can do.”

The baht has not been pegged to the US dollar since 1997.

Thailand’s Election Commission has tentatively scheduled the country’s general election for May 7 next year.

The general election plan was announced as the government’s four-year term of office is expected to end on March 23, 2023.

According to Section 102 of the Constitution, the general election must be held within 45 days after the government’s term ends. That day falls on May 7, 2023.

For the Thai citizens who cannot cast their ballots on the schedule, the EC will set an advance voting date on April 30, 2023, to facilitate the group.

According to the report, future candidates can start their campaign 180 days before the government’s term ends. The EC will launch rules and guidelines for each candidate to follow later.

Residents of Nakhon Pathom province are warned to stay indoors as a significant chemical leak occurred at the Indorama Polyester Industries factory in Nakhon Chai Si district this morning.

People from kilometres around reported a “foul, burning stench” emanating through the sky.

Several schools, including Thammaraksa School and Mahidol University International Demonstration School, have been evacuated and have announced temporary closures.

Thailand’s Pollution Control Department and Department of Disaster Prevention and Mitigation launched an investigation into the leak. The department has identified the chemical as a compound used as a heat exchanger in plastic production.

At 10.20 am, the Environment and Pollution Control Office asked locals to avoid going outdoors, wear a mask at all times and see a doctor right away if they experience abnormal symptoms.

The leak can reportedly be smelt as far away as Nonthaburi province, according to one resident…

“Initially, I thought I could smell burning plastic waste. But after surveying the neighbourhood, I didn’t find anyone burning trash. Later, I heard a chemical leak from a factory in Nakhon Pathom, but it is far from here.”

Staff from Indorama Polyester Industries Ltd. said the leak occurred due to an accident at the factory at about 6.15 am this morning. The team said the leak had been fixed.

Seven months after famous actress ภัทรธิดา พัชรวีระพงษ์, more commonly known as Tangmo, fell from a speedboat and drowned in the Chaophraya River, the court has ordered all six defendants in the case to pay damages to Tangmo’s mother.

The defendants also presented Tangmo’s mother with earrings today in court with an estimated value of 500,000 baht. Tangmo’s mother was reportedly satisfied with the damages and salary agreement.

The defendants were on board the speedboat the night Tangmo died, apart from the lawyer who allegedly “coached” Tangmo’s friends about what to say in their police statements.

The six suspects are still facing several criminal charges in the ongoing case. The most severe accusation pressed on all suspects, but the lawyer is “recklessness causing death,” which is punishable by ten years imprisonment and a fine of up to 200,000 baht.

The court will examine the evidence again on December 22, when the defendants give further statements.

A former deputy commissioner of Provincial Police Region 8 found guilty of fraudulent activity has had his 137 million baht fortune confiscated by Thailand’s Criminal Court for Corruption.

Pol Lt Gen สมชาย นิตยบวรกุล was found guilty by the National Anti-Corruption Commission on August 10 of having assets worth more than he could ever afford about his rank and salary.

The NAAC Secretary-General, Niwatchai Kasemmongkol, told a Thai press gathering yesterday that Pol Lt Gen Somchai was “unusually wealthy for his position”. And the department had sufficient evidence to accuse him of amassing extraordinary wealth while serving as deputy commissioner.

Pol Lt Gen Somchai, his wife Kesinee, and daughter Panisra were ordered to hand over purchasing and ownership documents about their fortune of about 137 million baht to the Finance Ministry.

The name of Pol Lt Gen Somchai’s wife was on assets that included a house in Hua Hin, ten expanses of land and two commercial buildings in Hua Hin, a condominium in Bangkok, and two savings accounts with the Chumphon police.

His daughter owned an apartment in Bangkok and a Mazda 2 car.

Subscribe or Join our YouTube channel today and become a Thaiger Legend or a Thaiger Cub for behind the scenes footage and other member-only perks.